Here’s what you need to now about the multi-billion-dollar funding designated for the water and wastewater markets as part of the American Jobs Plan.
#water-wastewater

There has been abundant back-and-forth since those first proposals were presented. Several other plans have been offered that have a price point in between. Much of the deliberations have centered around the definition of infrastructure and whether it should include elements of social infrastructure along with the physical assets (i.e., “traditional infrastructure”).

“Infrastructure is on center stage now—finally. And there’s bipartisan backing and public support for a lot of it. That’s good news for the water/ wastewater space and the valve companies that serve that space,” said Tom Decker, a water/wastewater consultant and owner of Thomas E. Decker Consulting. “There will continue to be debate between physical and social infrastructure, and the magnitude of the spending, but both the Democrats and Republicans agree that water/wastewater funding needs to be included.”

The water/wastewater market has been strong for several years. The total market size was $265 billion in 2018 and is projected to reach $457 billion by 2026, with a compound annual growth rate of 7.1% during that period, according to a market research report from Fortune Business Insights.

1. AN INFLUX OF FEDERAL MONEY EARMARKED FOR WATER/WASTEWATER IS LIKELY.

In addition to the various proposals for a large, comprehensive infrastructure package, there are numerous legislative bills in the works related to water/ wastewater, but these three are the most significant:

Senate Bill 914 – The Drinking Water and Wastewater Infrastructure Act of 2021, which passed the Senate in May, reauthorizes or establishes a variety of programs to provide safe drinking water or treat wastewater. For instance, the bill authorizes and revises the clean water state revolving fund (SRF) and the drinking water SRF, as well as the Water Infrastructure Finance and Innovation Act (WIFIA).

House Bill 1915 – Introduced in March, the Water Quality Protection and Job Creation Act of 2021 focuses on wastewater infrastructure. It amends the Federal Water Pollution Control Act to reauthorize certain water pollution control programs and increases the funding for the clean water SRF. “There’s a lot to play out here. Is there going to be a single bill or a collection of targeted bills?” said Decker. “I believe there will be investment in water/wastewater infrastructure in some shape or form. We just don’t know exactly what yet.” 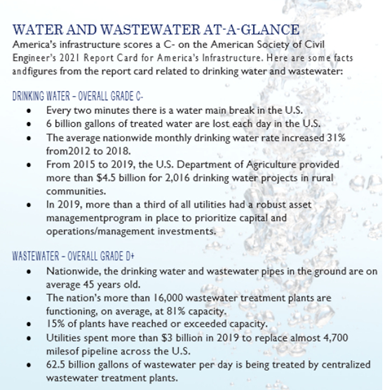 2. FUNDING WILL FACILITATE CONTINUED MARKET GROWTH, NOT A BOOM.

“When legislation passes in whatever form it takes and the money is appropriated, it will juice the market a little bit more than it is now,” said Decker. “But in my estimation, it won’t be a sudden avalanche because the market has already been growing. It will be incremental.”

Part of the reason for steady growth is the nature of municipalities and private water companies, which tend to be conservatively managed, added Decker. “These aren’t dot-coms or chip makers. They are not prone to wild spending sprees,” he said. “They have the general public, elected officials, customers and shareholders to answer to, depending on if they are public or private.”

To date, the WIFIA program has funded 50 large projects—over $20 million each—through long-term, low-cost supplemental loans. And applications have skyrocketed during the past three years, said Decker. Selected projects range from a new $50 million water treatment facility in Biddeford, Maine, that replaces a facility built in 1884 to a $1.3 billion joint project involving a water district and a city in Oregon to provide additional resilient water supply capacity. While large-scale proposals such as these gain media attention, many other municipalities and utility companies focus on smaller projects.

3. REPAIR AND REHABILITATION PROJECTS WILL REMAIN ON THE AGENDA.

Utilities are spending more on operating expenses than capital expenses. “That’s a pattern that’s been in place for a while now, and the driver is that companies and municipalities are rehabilitating and replacing components,” said Decker. “Rather than sinking money into brand new stuff, they’re fixing what they’ve got.” In addition, energy and supply costs are also on the rise, which further increases operating expenses.

“Determining top priorities for funding water and wastewater upgrade projects is a challenge for utilities because the need is so great,” said Nebosis. “In certain parts of the country, the focus will be upgrading old infrastructure, while in others it may be on water and wastewater expansion to accommodate population growth.” 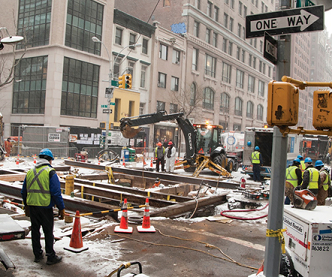 Decker recalls one utility manager telling him the municipality had been “kicking the can down the road” on overdue capital projects. “The manager said, ‘Sooner or later, we’re going to have to stop fixing this waterline that keeps breaking and just put in a new one,’” said Decker. “An influx of potentially available capital from these legislative bills will likely be used for CapEx projects that have been put off.”

So, what capital projects might utilities embark upon, and what valve and control products will they need? Decker said that utilities in the drinking water segment assert their greatest needs are in transmission and distribution systems, while the wastewater segment is focused on collection systems. “All types and sizes of valves commonly used for flow control associated with pumping stations out in the system are probably going to be in more demand than ones in treatment plants,” he added.

Decker also recommends that valve suppliers pay close attention to the kinds of work being done by consulting engineering companies. Currently, the increase in drinking water consultation has been greater than the increase in wastewater work. “Down the road, something the engineers are working on is going to be built and need equipment,” he said. “If you sell valve products on the water side, you might want to take a serious look at what your water side product line looks like.”

5. SYSTEM DIGITIZATION IS THE WAY OF THE FUTURE.

Digitization of systems is a priority for the water and wastewater industry. Utilities require an array of digital technologies related to everything from smart meters to operations and maintenance management. Sensors and monitoring innovations collect valuable real-time data. For instance, a wastewater utility in San Antonio, Texas, installed in-pipe sensors to collect data and optimize the network’s cleaning schedule. It saved thousands of dollars in each location a sensor was installed.

Decker encourages valve and control product suppliers to consider their role in digitization. “Do you offer a more modern, more functional, more efficient digitized smart valve that can replace one from 20 years ago?” he said. The goal for a utility employee is to “sit at a screen in their den and operate any- thing out in the system,” he said. “How does the digitized part of your product fit in with that?”

The May ransomware attack that shut down the Colonial Pipeline led to an emergency declaration for 17 states and Washington, DC, as well as gasoline shortages and price hikes. While it highlighted the vulnerability of America’s infrastructure system, including water and wastewater utilities, it wasn’t the first major warning of 2021. The historic cold snap in Texas in February caused widespread frozen and burst water pipes.

“There was a real wake-up call for a number of utilities in the south,” said Decker. “Municipalities and private companies are searching for ways to fortify and strengthen their systems from the forces of nature and outside attacks so they can assure reliable operations.” The Environmental Protection Agency’s Creating Resilient Water Utilities initiative provides tools, training and technical assistance to water, wastewater and stormwater utilities to increase resiliency.

These aren’t the only factors affecting the water/wastewater industry and valve and control product suppliers serving the market. Supply chain concerns and inflationary pressure also play a role. “Global supply chains are currently strained as they attempt to get back to pre-COVID levels,” said Nebosis. “Valve suppliers will need to accelerate ramping up capacity to meet additional demand if [legislation] passes.”

However, inflation could dampen capital spending even if there are additional federal dollars available, said Decker. “So, watch inflation and interest rates—the state revolving funds and WIFIA. They currently have excellent rates, but they are subject to market pressure,” he said.

In addition to these global issues, water/wastewater utilities face a host of industry-specific challenges. “Their concerns include dealing with everything from aging systems, struvite, wipes, regulatory compliance, safety, odor and more,” said Nebosis. “Many facilities are developing systems that can deal with too much water or not enough, depending on location and changing weather conditions.

”Rather than bemoaning the challenges, suppliers should view them as opportunities. “As valve manufacturers, we need to provide options for practical, cost-effective valve solutions to help utilities meet these challenges,” said Nebosis.

If the federal government allocates long-overdue money to infrastructure, that will go a long way toward helping suppliers with their water and wastewater clients.