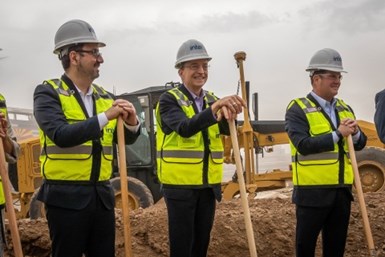 As reported in a press release, Intel broke ground on two new leading-edge chip factories at the company’s Ocotillo campus in Chandler, AZ. In a groundbreaking ceremony attended by senior government officials and community leaders, Intel CEO Pat Gelsinger celebrated the start of construction on the largest private investment in state history and reiterated the company’s commitment to investing in U.S. semiconductor leadership.

“Today’s celebration marks an important milestone as we work to boost capacity and meet the incredible demand for semiconductors: the foundational technology for the digitization of everything. We are ushering in a new era of innovation—for Intel, for Arizona and for the world. This $20 billion expansion will bring our total investment in Arizona to more than $50 billion since opening the site over 40 years ago. As the only U.S.-based leading-edge chip maker, we are committed to building on this long-term investment and helping the United States regain semiconductor leadership, said Gelsinger.

Advanced domestic chip-making capacity and capabilities are critical for the sake of both economic and national security. The United States has lost ground in semiconductor manufacturing and is at risk of falling farther behind. With its new IDM 2.0 strategy, Intel is doing its part to help rebuild U.S. leadership and bring more balance to the global supply chain. Intel is the only semiconductor manufacturer with leading-edge process and packaging research capabilities in the United States, and the company is investing in domestic capacity to support the surging worldwide demand for chips across multiple segments, from PCs to automobiles to the data center and more.

The two new fabs in Arizona will not only support growing demand for Intel’s products, but will also provide committed capacity for the recently announced Intel Foundry Services (IFS). “With Intel Foundry Services, Intel is opening its fab doors wide to serve the needs of foundry customers around the globe – many of whom are looking for more geographical balance in the semiconductor supply chain,” said IFS President Randhir Thakur in a new editorial. “Customers are enthusiastic about these capabilities. And we have plans for continued investments in the United States, but we can’t do it without government partnership to level the playing field. As Congress returns from recess, we urge both chambers to send a bipartisan bill to President Biden aimed at bolstering American competitiveness and investing in advanced semiconductor manufacturing and R&D.”

With the addition of the two new factories—to be named Fab 52 and Fab 62—Intel’s Ocotillo campus will house a total of six fabs. The new investment will create more than 3,000 high-tech, high-wage Intel jobs, 3,000 construction jobs, and support an estimated 15,000 additional indirect jobs in the local community. When fully operational in 2024, the new fabs will manufacture Intel’s most advanced process technologies, including Intel 20A featuring the new RibbonFET and PowerVia innovations.