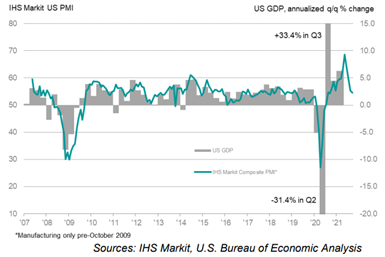 Private sector firms in the U.S. signaled a solid expansion in output during September, albeit at the slowest pace for a year and one that was much softer than that seen at the start of the summer, as reported in a press release from IHS Markit. The overall upturn was weighed on by the weakest increase in service sector business activity in the current 14-month sequence of growth.

Adjusted for seasonal factors, the IHS Markit Flash U.S. Composite PMI Output Index posted 54.5 in September, down from 55.4 in August and much lower than May’s record high. The rate of output growth was the softest since September 2020, amid a notable slowdown in the pace of expansion in service sector activity compared to earlier in the year. At the same time, new order growth eased to the slowest since August 2020. Although demand conditions at manufacturing firms remained very strong by historical standards, the upturn in service sector new business slowed to a 14-month low as COVID-19 concerns persisted. While new export orders increased at a faster pace, the improvement was confined to manufacturing. Service providers registered a solid decline in exports as ongoing virus restrictions continued to impede activity.

Challenges finding suitable candidates and difficulties retaining employees were reflected in firms reporting only a fractional rise in employment for a second month. Backlogs of work rose strongly due to the resulting pressure on operating capacity. The rise in outstanding business was the second fastest in over 12 years of data collection, with a record increase seen in manufacturing.

On the price front, input costs rose at a sharper pace during September. The rate of cost inflation was the quickest for four months, and the second highest on record, as supply chain disruptions and material shortages pushed prices and transportation costs up. Meanwhile, output charges continued to increase markedly, continuing to rise at a pace far outstripping anything seen in the survey’s history prior to May, as firms sought to pass on higher costs to clients where possible. Optimism at private sector firms was robust in September.

The seasonally adjusted IHS Markit Flash U.S. Services PMI Business Activity Index registered 54.4 in September, down from 55.1 in August, to signal a solid but slower rise in business activity across the service sector. The upturn in output was the softest in the current 14-month sequence of expansion and slowed once again from May’s recent high.

The health of the manufacturing sector improved substantially in September, as highlighted by the IHS Markit Flash U.S. Manufacturing Purchasing Managers’ Index posting 60.5 at the end of the third quarter, down slightly from 61.1 in August. Although the pace of improvement in operating conditions was the slowest for five months, it was marked overall.

Supply constraints and material shortages dampened output in September. Although strong, the rate of expansion in production was the slowest for 11 months. Lead times lengthened substantially as trucking issues and capacity shortages led to one of the greatest deteriorations in vendor performance on record.

Manufacturers expanded their workforce numbers at a steeper rate in September. Despite many firms noting challenges finding suitable candidates and retaining current employees, many were able to hire additional workers, often offering greater wages to entice staff. Goods producers registered another significant rise in input costs, albeit slightly slower than August’s recent high. Soaring material prices led to one of the fastest increases on record. As a result, the rate of selling price inflation accelerated to the sharpest since data collection began in May 2007 as firms passed higher costs on to their clients.