As far as costly disasters go, Hurricane Ida was no Katrina, but the damage inflicted by its rapid escalation and unpredictable path is troubling to observers who say the event reflects a newly ascendent type of storm that is both less predictable and more expensive, according to NBC News reports on Sept. 7. 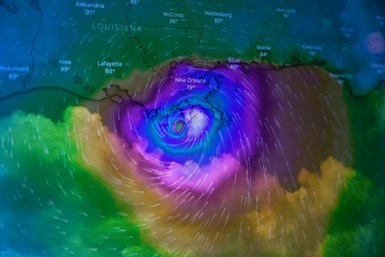 As far as costly disasters go, Hurricane Ida was no Katrina, but the damage inflicted by its rapid escalation and unpredictable path is troubling to observers who say the event reflects a newly ascendent type of storm that is both less predictable and more expensive, according to NBC News reporting on Sept. 7.

Adjusted for inflation, insured losses from Hurricane Katrina in 2005 added up to about $86 billion. Early estimates from the catastrophe-modeling firm AIR Worldwide suggest that insured losses due to Hurricane Ida will fall in the range of $17 billion to $25 billion. Typically, insured losses as a percentage of total property damage or destruction inflicted by hurricanes are about 40% — standard property insurance policies don't cover damage caused by flooding, which makes up much of the rest.

“That's a specific feature to Ida versus historical storms ... and the damage pattern and consequences of the impact is highly different if you have wind damage,” said Ernst Rauch, chief climate and geo scientist at the reinsurer Munich Re.

Cathy Seifert, an insurance analyst at CFRA Research, said, “Hurricane Ida was such a wind-centric storm, and then a lot of the damage is going to be from wind and not flooding. That wind damage is more apt to be covered by insurance.”

The difference could be significant. Seifert estimated that insured losses could be closer to the industry average across disaster types, which is around 55 percent.

Catastrophe-modeling companies work with reinsurers — the insurance companies’ insurance companies — on the front lines of natural disasters. Reinsurers’ profitability depends on their finely calibrated models to evaluate risk, honed over decades of disaster research. Climate change is throwing a wrench into them.

“When it comes to hurricanes or tropical cyclones in the North Atlantic, we see a number of developments of relevance,” Rauch said. “The share of the strongest storms — Category 4 and 5 — has increased relative to the overall number of hurricanes, so we see more stronger storms. We also observe, in the North Atlantic in the last 20 to 30 years, an increase in the overall frequency.”

Just within the past decade, Rauch said, hurricanes have become much wetter, saturating areas with heavier rain. A storm also is more likely to “stall” and remain over a place for a long time, which heightens the risk of flood-producing rain.

Along with the potential for more severe damage, soaring prices for raw materials, such as lumber, and a labor shortage in the construction trades deliver a double hit to the bottom line for rebuilding damaged or destroyed structures.

Demand surge, which can drive up prices for building materials and labor, happens after many disasters, as hardware stores are cleared out of inventory, for example. That can elevate prices temporarily, but disaster insurance professionals say the blips are local and temporary.

The coronavirus pandemic has thrown those expectations into disarray. According to Xactware, a sister company of AIR Worldwide, pandemic-triggered disruption of supply chains has made the cost of building materials about 30 percent higher than they were before the pandemic.

“I definitely think there’s going to be quite a bit of impact overall. The supply chain is constrained already, and we're already in peak season,” said Spencer Shute, principal consultant at Proxima, a supply chain and procurement management firm. “It’s going to be a compound issue.”

Demand for lumber, wallboard, insulation and the like typically follows a pattern, Shute said. Prices rise and then fall in a seasonal lull. But the shortages triggered by the shutdowns of lumber mills in the early days of the pandemic, port slowdowns and a scarcity of truck drivers — to name just a few bottlenecks — have kept prices elevated.

"We’re going to start seeing a prolonged peak season primarily due to labor shortage and just the overall timeline of getting materials,” Shute said, which means typical seasonal increases are starting from a higher baseline.

As more people build homes in locations at risk of floods, fire or other natural disasters — or as their long-standing homes and communities become increasingly risky places for inhabitants — demand for industrial and construction building components is expected to remain high.

Jim Blackburn, professor of environmental law at Rice University, said he understands people’s reluctance to uproot and move their homes — if not entire communities — to areas deemed less vulnerable to catastrophe. “The policies aren't popular,” he said. “Nobody wants to voluntarily retreat from the coastline, [and] they don't want to be bought out — but that’s when they're dry.”

He said he worries that the cumulative burden of rebuilding homes, offices, hospitals and industrial facilities after successive disasters will be too much for anyone to bear.

“I don't think, as a country, we’ve ever really thought this through,” Blackburn said. “Conditions are changing, and it’s just hard, I think, for our brains to compute that the way of life for hundreds of years is no longer going to be the way of life in the future. That’s climate change.”